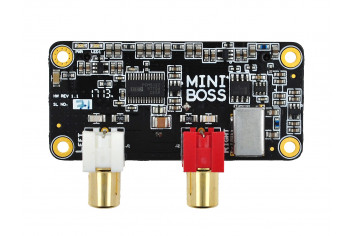 There are many DACs for RPI Zero. Most of them low-priced, carbon copy of datasheet, slave DACs.

We decided to do something different:

Costing more (about the price of a large pizza, extra), we implemented the first Master DAC based on PCM5122 with many improvements over the standard circuit.

The RPI has one major problem with audio. The clocks coming from CPU can only output one frequency clock perfect (very close), resulting in major problems with audio files sampled at 44Khz (and multiple). Too much jitter on i2s clocks. So, we invented the Kali - but there is a second way.

Enter the master mode for i2s. Instead of the RPI giving the clock on the line, the DAC itself sends the clocks, and RPI sends the data (file to be played). Since we used 2 clocks the problem above disappears.

Ours is the first Master DAC for RPI Zero on the market.

Our miniBOSS DAC is also unique, because of the way we have implemented the power design. First, we separate the power on 3 channels and filter it: one for the digital side, the second for analog and third for the clocks themselves. Then we take the filtered power and use a second filter (LDOs) to further quiet the noise. In addition, we use Japanese oscillators from NDK for a very low jitter clock - almost as good as the famous Crystek.

Finally, on the analog stage we are using a film capacitor and some ceramics for a quiet DC to feed the TI IC. Not happy with this, we have added a supercapacitor for an extra kick when analog stage is asking (like deep bass). Please understand... this is not an artificial bass booster... this is the bass as it was recorded. The only difference, enough electrons are present on our DAC (bass needs power) to be finally heard.

What we have achieved, in our opinion, is the best DAC for a RPI Zero.

* Please note that all acrylic cases we ship, have a protective film (which looks like brown paper). You will need to peel this film off, in order to reveal the case. This is to prevent scratching and fingerprints during shipping. 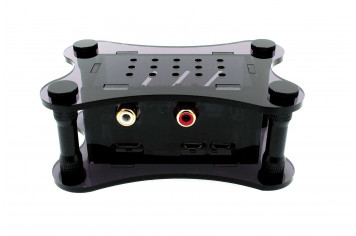 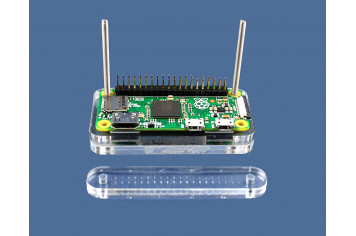